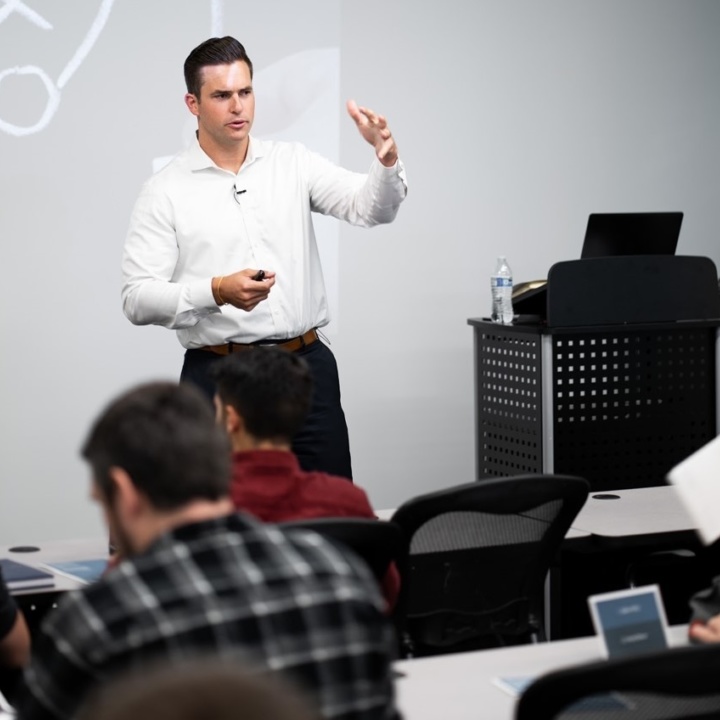 A former NFL fullback, Collins played 5 seasons between the Saints, Bears, Chiefs, Browns and Titans. He also had a successful collegiate career at Washington State University where he owns a school record for passes caught by a tight end. We caught up with the Former Player Rep turned CFP and he gave us insight into his life during and after football.

My current career has two directions, I do public speaking and workshops for corporations and then the other half is my true passion which is the book I am writing that will be released in 2020. On top of that, I facilitate workshops around financial education, something I feel called to do and am truly interested in.

Challenging, but I was fortunate enough to have walked away from the game having captured what I call “the true dream” which is having something to show for my time in the NFL. As I walked away I just knew I wanted to go down the financial path. I used every off season during my 7 years in the league to study for my CFP. (Certified Financial Planner). Since I had that as a direction it gave me at least a yard stick to start walking towards. But still the transition out of the game, losing my routine, and what felt like my purpose and focus was definitely a challenge. One of the jokes I made early on was that there was this humbling reality that no one was going to clap for me anymore, you don’t think you are going to miss it but, we all have enough of an ego, so we really do.

What are you most proud of during your time as a player rep?
I was a player rep during the time where DeMaurice was getting re-elected back in 2013, or around then. But more personally, I am most proud of being the one in the locker room who other guys would come to for questions about benefits etc. That explanation aspect is what led me to the career I am currently pursuing in financial education and financial empowerment. It helped me truly identify the lack of understanding around talking finance and money, it’s a foreign language to some people.

How has being a player rep impacted you personally & professionally?

It impacted me because it identified that desire within me to help people. A player rep’s main role is to see the needs of the other players, whether those players are younger, the same age or even older. Identifying the team and locker room needs and servicing them. Being in that service mindset has been a really neat personal development for me. It also translated right into my professional career, being able to be a leader has helped in all aspects in my life and again, having that service mindset has translated into a lot of the areas I am in now. Then obviously explaining the benefits of walking away from the game seeing what it gave me instead of walking away with some sort of spite. Being able to address that issue first hand has been somewhat of a professional landmark for me.

What advice would you give yourself looking back?

Such a good question. Advice to myself looking back would be to network, both in the locker room and in the community. When you are an active player you have every door open to you that you can imagine because of the reach and the power of the National Football League. A current player transitioning into a former player still has many of those doors open but it doesn’t have the same appeal. I would just say to open as many doors as you can as a current player, so you can walk through them and use those connections as a former player. Also, begin to build your personal brand. Not necessarily externally on social media, although I would suggest it, but being able to identify one or two things you want yourself and your story to stand for can be a major benefit.

Have you taken advantage of any of the services of the PA since retirement?

I got to go to a few of the entrepreneurial programs as well as the health screenings, like Brain and Body. I also am logged into the Trust and do some stuff through them. But ultimately, I am understanding more and more of what is available to me and why I would want to capitalize on it. It’s one for the reasons why I am getting more involved in this world, I know there is so much offered that I am not currently taking advantage of.

So, I have recently decided to leave the company I am with, and I have started my own business, Rookie to Veteran, which is focused around developing a toolbox of success. I want to help others with performance or personal finances and create a company without directly looking for clients. I want to focus on students, whether those students are 22 or 52. I want to be able to give them direction, give them guidance, and tell them stories but at the end of the day give them actual takeaways that will help them benefit in their career. The two books that will come out, both in 2020, will empower people to own their story. The first, titled Your Money Vehicle is focused on their financial story and understanding strategy and being efficient in money. My object is to get people to use money and not just go to work for money but to get money to work for them.

Just to all the guys transitioning out of the game, or even the ones still in, I want them to be able to identify all they gained from the game. Whether it’s from a financial perspective, a professional perspective or an individual growth perspective. I think that’s also what the NFLPA’s objective can be, do a better job of translating and communicating the benefits of the game. Just continue to identify what the game has given us and stay away from what it took.