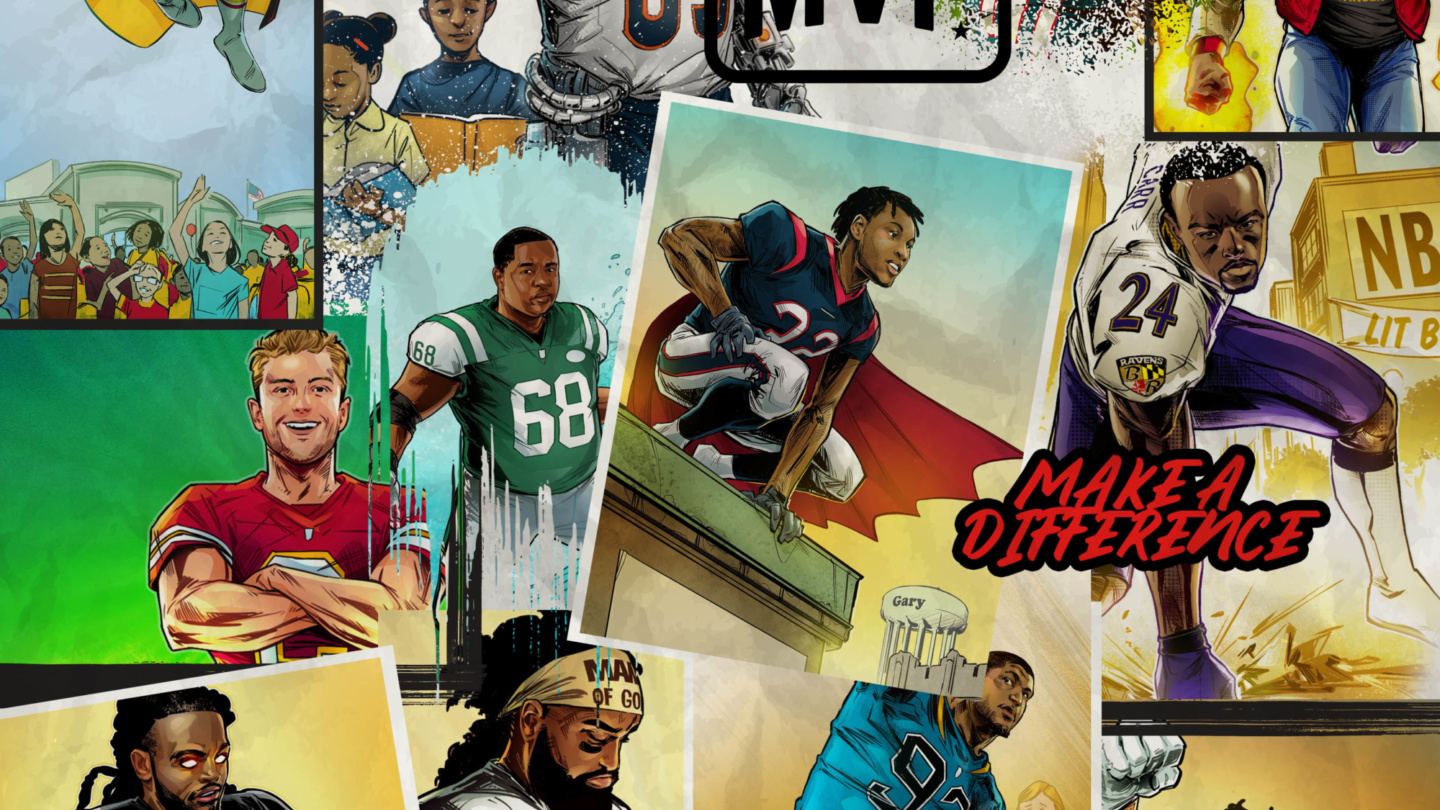 Using their ultra-super powers for good, NFL players around the league have dedicated their lives to protecting their communities and saving the world. When they’re not scoring touchdowns or tackling for loss, NFL players are finding ways to serve their hometowns and team cities – even during the season when time off the field is very limited. Because of this, each week during the regular season, the NFLPA #CommunityMVP program recognizes one player who has demonstrated a commitment to making a positive impact in his community. The weekly Community MVP winners will also become eligible for the NFLPA Alan Page Community (APC) Award, which is the highest honor that the NFLPA can bestow upon a player.​

For being named Community MVP, the NFLPA will make a $10,000 donation to the player's foundation or charity of choice. In addition, our new partner Pledge It will set up a crowdfunding campaign where supporters can pledge donations to the player's cause based on their on-the-field performances during the season.

Since launching his Local Human apparel line, with all proceeds going toward his Do Good Foundation, Rochell has raised more than $50,000 for social justice and pandemic relief efforts while helping thousands of underserved individuals.

The Chicago Bears offensive lineman contributed nearly $35,000 in monetary donations and gifts to help underserved communities in his team city of Chicago and hometown of the Bay Area.

The 2020 Alan Page Community Award winner once again showed his giving heart, providing more than $160,000 in gifts for families in need across 18 states.

Through his Project McManus foundation, the Denver Broncos player rep is helping out those most affected during this tumultuous year – small businesses and underserved families.

The Atlanta Falcons tight end is using his platform to raise awareness of mental health issues in children, build programs to help them cope with trauma and inspire others to get the help they need to achieve mental wellness.

For the third straight year, Geno Atkins earned NFLPA Community MVP honors following his annual “Atkins Week of Giving,” which helped out more than 800 people in his team city.

Tennessee Titans defensive back Malcom Butler took putting on for his city to another level, providing Thanksgiving food and funds for 600 underprivileged families from the three support systems that he credits for his NFL success.

From Sacramento to Qatar, Arik Armstead has virtually connected with students in 21 classrooms across 15 school districts to lift their spirits during the pandemic and promote literacy to those who may not have access to books.

When it comes to voting, Patrick Mahomes is the real MVP. The Kansas City quarterback helped foot the six-figure bill for new polling equipment that will be used for the next 10 years of elections.

For a second straight year, Corey Clement delivered a Philly Special for students across the country, teaming up with the National Youth Foundation to lead its Student Book Scholar contest that promoted anti-bullying.

With 43 percent of students in his hometown of Blakely, Georgia not having proper technology access for remote learning, Shawn Williams launched a fundraising campaign to ensure that every Early County High School student in need had a Chromebook.

Harrison Phillips continued his support of the special needs community by hosting a drive-in movie event for 200 families that featured sports play packs, presentations by the police & fire departments and a Zoom chat with the Buffalo defensive lineman.

Oren Burks used a friendly competition for charity, challenging his fellow Green Bay linebackers to participate in the annual fundraiser for House of Hope Green Bay that generated thousands of dollars for women and children experiencing homelessness.

Landon Collins continued his fight against food insecurity by providing 1,500 meals, along with gift cards and other resources, for single-parent families in need across Virginia and Washington D.C.

Rodney McLeod wants to make sure everybody eats – AND votes. The Philadelphia Eagles safety had 40,000 pounds (2,000 bags!) of fresh food delivered to the local Share Food Program and provided voter registration on site for families.

To honor the legacy of his late grandfather, Cam Heyward installed his first Little Free Library, providing 24-7 access to the treasures of reading while promoting literacy for underserved Pittsburgh communities.

Kevin Byard got his Nashville community into the school spirit by personally packing and distributing 300 distance learning kits of school supplies, essential hygiene items, gift cards for families in need.

On the field, Page was an unstoppable force, swallowing up quarterbacks and opponents in his hulking grip as part of the Minnesota Vikings' defensive line - better known as the "Purple People Eaters." Possessing an endurance that was out of this world, the All-Pro lineman played in 218 consecutive games and, in 1971, became the first player to win both the Defensive Player of the Year and Most Valuable Player awards in the same season. Along the way, he was never afraid to fight for justice in the league. As an NFLPA player rep (1970-74, 76-77) and member of the union’s Executive Committee (1972-75), Page ensured that player rights were protected and advanced.

Gridiron great by day and legal scholar by night, Page earned his law degree from the University of Minnesota Law School and worked at a law firm while still playing in the NFL. After hanging up his cleats in 1981, he soared up the legal ladder until becoming the first African-American elected to the Minnesota Supreme Court, where he served from 1992 to 2015.

Although he’s retired from football and the bench, Page is still fighting for good. Through The Page Education Foundation, which was founded by him and his late wife Diane, minority students are provided with financial and mentoring assistance in exchange for the students’ commitment to engage in community volunteer work.

The Robin to your Batman. The Pumbaa to your Timon. You couldn't do the great work you do in your community without a supporting cast. These are your presenting partners.

Each week during the regular season, we will recognize one active NFL player who has demonstrated a commitment to making a positive impact in his community. For being named Community MVP, the NFLPA will make a $10,000 donation to the player's foundation or charity of choice. In addition, our new partner Pledge It will set up a crowdfunding campaign where supporters can pledge donations to the player's cause based on their on-the-field performances during the season. The weekly Community MVP winners will also become eligible for the annual Alan Page Community Award, which is the highest honor that the NFLPA can bestow upon a player.

Community MVPs will be selected by a committee of NFLPA staff. Community MVPs will be announced on Friday of each week in order to gain maximum promotional exposure. Each week’s runner-ups will be recognized by name and with a photo and description of their charity work on the following Tuesday in a social media post. Once a player has been named Community MVP, he is not eligible to win again during the same season. Players will vary by positions and by NFL teams.

Players must meet the following criteria to be considered for Community MVP: Charitable/community initiative is organized and led by an individual player and/or his foundation (not an NFL team or sponsor-led initiative). Player should be active with a specific cause or through his foundation. The community/charitable initiative should have taken place within the one-week period (Thursday of the preceding week to Wednesday of the current week) before the Community MVP is announced. Player should have participated in recent community work or held other recent events. From the pool of weekly Community MVPs, a distinguished panel of judges will choose five finalists for the Alan Page Community Award, each of whom will receive an additional $10,000. From those five finalists, the active player membership will vote for the APC Award winner, who will receive $100,000 for his foundation or charity of choice.