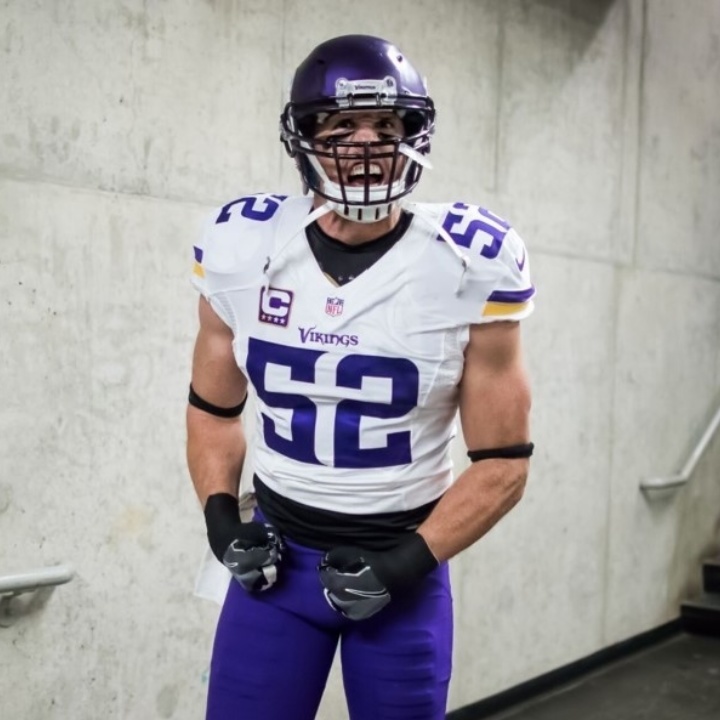 A former NFL linebacker, Greenway played 11 seasons with the Minnesota Vikings. He graduated from the University of Iowa and was drafted in 2002. We recently caught up with two- time Pro Bowler and first-round draft pick, he gave us insight into his life during and after football.

I have a couple different careers, but I am a Dad and Husband first. I am a volunteer and president of the board for our local youth basketball association here in our community. I have 4 daughters, so girls’ basketball and girls’ sports are very important to me. Much along the lines of what Kobe Bryant started with the MAMBA facility, I really try to just push girls and women’s sports. On top of that, I am an owner and a partner in Grey Duck Vodka which was started 18 months ago, and we’ve now expanded into five states. It’s a gluten free corn-based vodka that’s made right here in Minnesota, we source all our corn from west-central Minnesota and produce and distribute it from there. We are growing rapidly.

The experience has been good! I had a nine and a six-year-old when I transitioned out, so they were already getting really active in their own activities between soccer, basketball, and obviously school. I remained really active with them. The biggest thing for me was just kind of reenrolling into my family’s schedule. My wife had a specific schedule that was kind of already in place and I just fit myself into that. The biggest struggle was just managing my time and working with my family to help manage their time. Not having an office or place to go everyday was challenging at first but you just have to find your way and find new things. I did a lot of corporate speaking events as well, which I started while I was still playing. That has been really fun because I have been able to talk about my career and talk about my background growing up on a farm in South Dakota, being able to relate sports and agriculture is important to me. Having that speaking business was a really nice transition piece for me and also having a business of my own. When we started Grey Duck Vodka I didn’t know much about running a business, but I learned so much about the industry and it has been a lot of fun. You realize it comes down to relationships and being authentic and it’s no different from being a player, trying to relate to teammates and/or coaches and staff. So, a lot of similarities, and the game was very good to me and prepared me in a lot of ways for what I’m doing now.

What are you most proud of during your time as a player rep?

I loved being a player rep, loved representing the team and just being that voice. I think the biggest thing for me was being able to get everyone’s different opinions. You feel like a politician in some ways. You want to do what’s best for the base and the core and also see everyone’s opinion. I think looking back I would have wanted to do it longer or have started earlier in my career, have had a bigger impact and a bigger voice. As I aged and got into my career it was really nice to be that guy, that liaison to the younger and older guys that weren’t in that position and give them a voice and hear their different opinions. The one thing about an NFL locker room that we can’t replicate in society are those diverse opinions, you hear from a culture side to a socioeconomical side and you see the full perspective. You can have an open conversation about things that are happening within the NFLPA and in the team. It can be discussed openly in a forum where everyone gets their opinion heard and is respected, I love that. The language and things may be colorful, but it was always a fun conversation no matter what the social topic was or what was going on in the world of the NFLPA and the NFL.

How has being a player rep impacted you personally & professionally?

Growing up on a farm I was given really big tasks as a young kid. Whether it was fixing a fence, moving cows, or anything that really impacted my family and impacted the success of that day on the farm. That really set me up to be in a position of leadership when I was in the NFL and in a position to influence. I had come from a great background. Being in front of people and leading became natural to me from my foundation as a kid up to my time at the University of Iowa. I had learned from some really great people, other guys who have been reps and have done a really nice job at being reps and really focused on giving out the facts of what was happening. I always felt like it was important for me to be that same type of person.

What advice would you give yourself looking back?

Have you taken advantage of any of the services of the PA since retirement?

Yes and no, I haven’t done any of the classes or entrepreneurial stuff, although I am very interested. I can’t say that I have really. But I think what the NFLPA does a nice job of is giving players their voice and giving them the tools to be successful. And when you do that you spit out kids that turn into men who can start their own businesses and be on their own which is so important.

What’s next for me, just continue to support my family and be there for my kids and my wife. Grow my family and watch my kids grow and be a part of and help them weave their own story. Continue to grow out small business and impact the community and Minnesota and hopefully beyond that and just see where it goes.