The NFLPA Community MVP recognizes players who are making a positive impact in their local communities. Each week, the NFLPA will celebrate one player who recently demonstrated his commitment to giving back to his community, and will make a donation to the player’s foundation or cause in support. This week’s #CommunityMVP is Seahawk Cliff Avril, for his dedication to combatting juvenile diabetes and helping youth lead healthy lives. The defensive end hosted his 2nd Annual Dining to Make a Difference event in the greater Seattle area on Monday.

Offensive and defensive  players from the Seattle Seahawks were running the same routes on Monday, September 28 as they took plates from kitchen to tables.

“The most memorable part of the event is when Riley Stark, a 10-year-old with type 1 diabetes, spoke about her story and how she deals with it on a day-to-day basis,” Avril said. “It was nice for attendees to be able to put an actual face to the cause.” 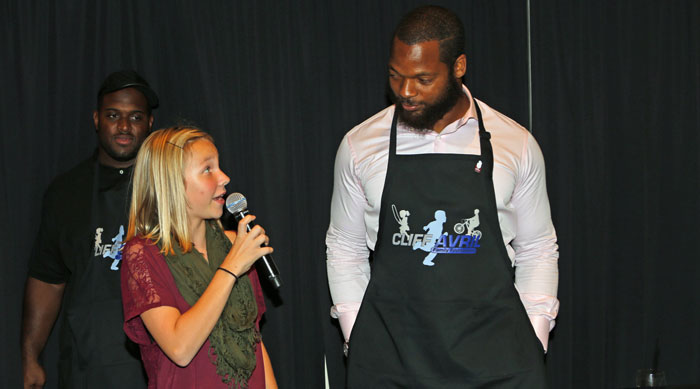 The sold out event at Columbia Winery in nearby Woodenville, Washington included live and silent auctions, with all proceeds supporting Avril’s foundation, which supports a cause very close to him and his family.

After losing his grandmother to type 2 diabetes, Avril knew he wanted to take action, and he knew he wanted to have a big impact on local youth. Founded in March 2014, the Cliff Avril Family Foundation increases awareness for juvenile diabetes and educates youth on the importance of leading a healthy lifestyle.

“This cause is important to me because not only did my grandmother pass away due to complications from diabetes, my mother and aunts have also been diagnosed with the disease,” Avril said. “I understand that diabetes prevention starts early with knowledge and establishing healthy habits like diet and exercise. Partnering with juvenile diabetes was a natural fit.”

In May, Avril competed in Nordstrom’s 33rd Annual Beat the Bridge to Beat Diabetes run to raise money for the Juvenile Diabetes Research Foundation. The race is one of the largest diabetes fundraising events of any kind in the Northwest. Avril opened his team, Cliff’s Club, to the public to help build a sense of community and reach his goal of a $10,000 donation to JDRF.

Since its launch, the Cliff Avril Family Foundation has also hosted three action-packed charity weekends near his hometown of Jacksonville, Florida. The 2015 event actually lasted almost a full week, and had a literacy awareness day at a local library, a celebrity bowling tournament, a free football camp and a family fun day.

“The main thing I'd like to achieve with the foundation is to spread knowledge,” Avril said. “I believe it's hard to fix or correct an unhealthy habit if you don't know it's unhealthy. Children and my family inspire me with hope that we can re-train thought processes to lead to long-term change and healthy lifestyles.”

Avril, who is already making a positive impact from the Pacific Northwest to Florida, is excited to stretch his foundation’s reach even further. The 29-year-old is proud of his Haitian heritage and eagerly anticipates bringing an American-style football camp to the country where his parents grew up.

“We hope to continue spreading knowledge on establishing a healthy lifestyle early in a country heavily affected with diabetes,” said Avril. “We are really looking forward to hosting our first football camp in Haiti.”

Visit the NFLPA Community MVP page for more information about the program:
https://www.nflpa.com/campaign/community-mvp