Lorenzo Alexander isn’t your typical two-time Pro Bowler. The Buffalo Bills veteran has been cut in training camp once, released twice and played for six teams. This journey started back in 2005, when the Carolina Panthers gave the undrafted free agent a shot. Now, as he enters his 14thcamp, Alexander took time to share wisdom with both rookies and veterans alike on how to approach the season.

QUESTION: What advice would you give players entering their first training camp and season?
ALEXANDER: What’s helped me is understanding my current position. I can’t judge my situation based on somebody else’s situation. You fit where you are on a team and understand the big picture. From there, try to get better every day and be a pro. 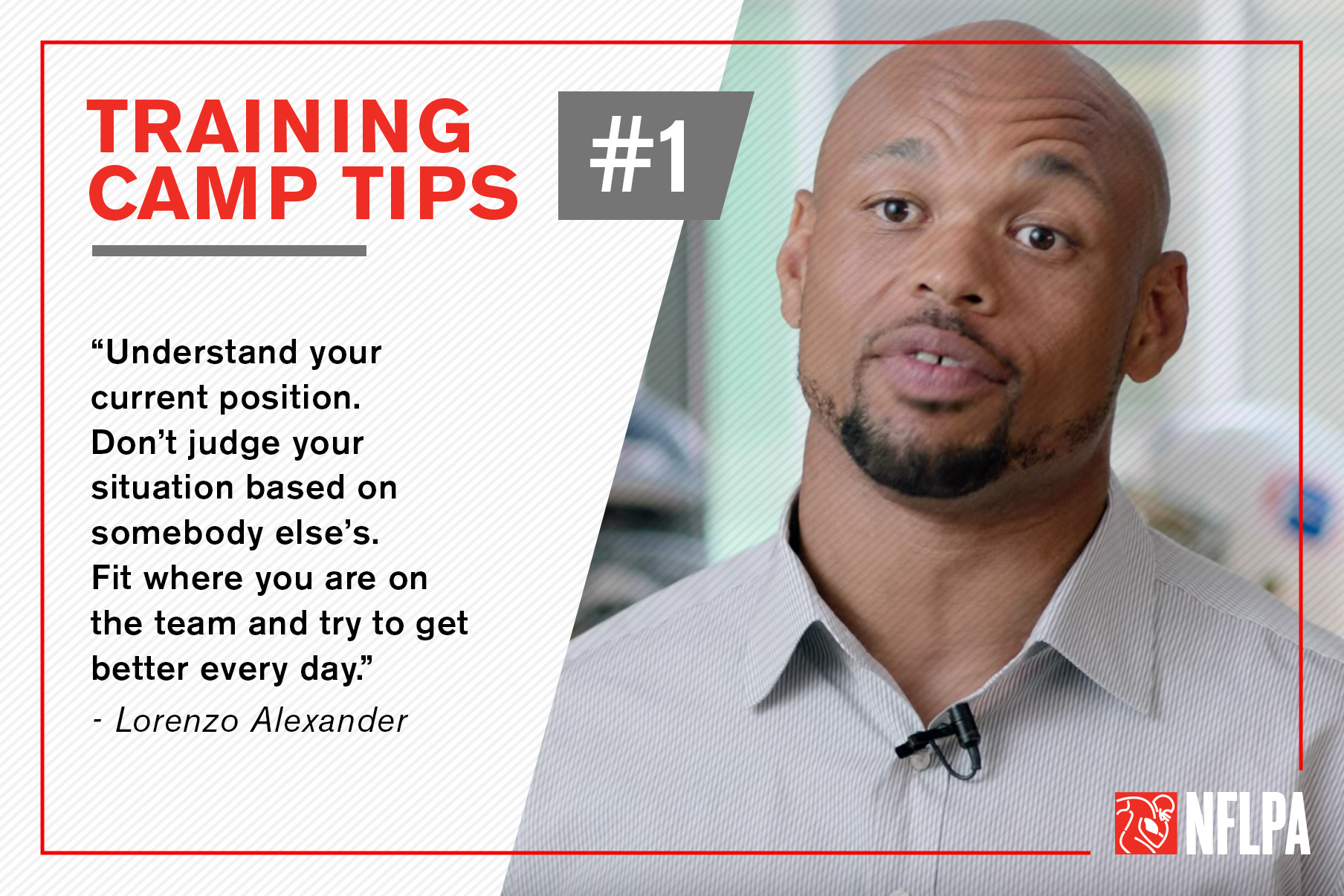 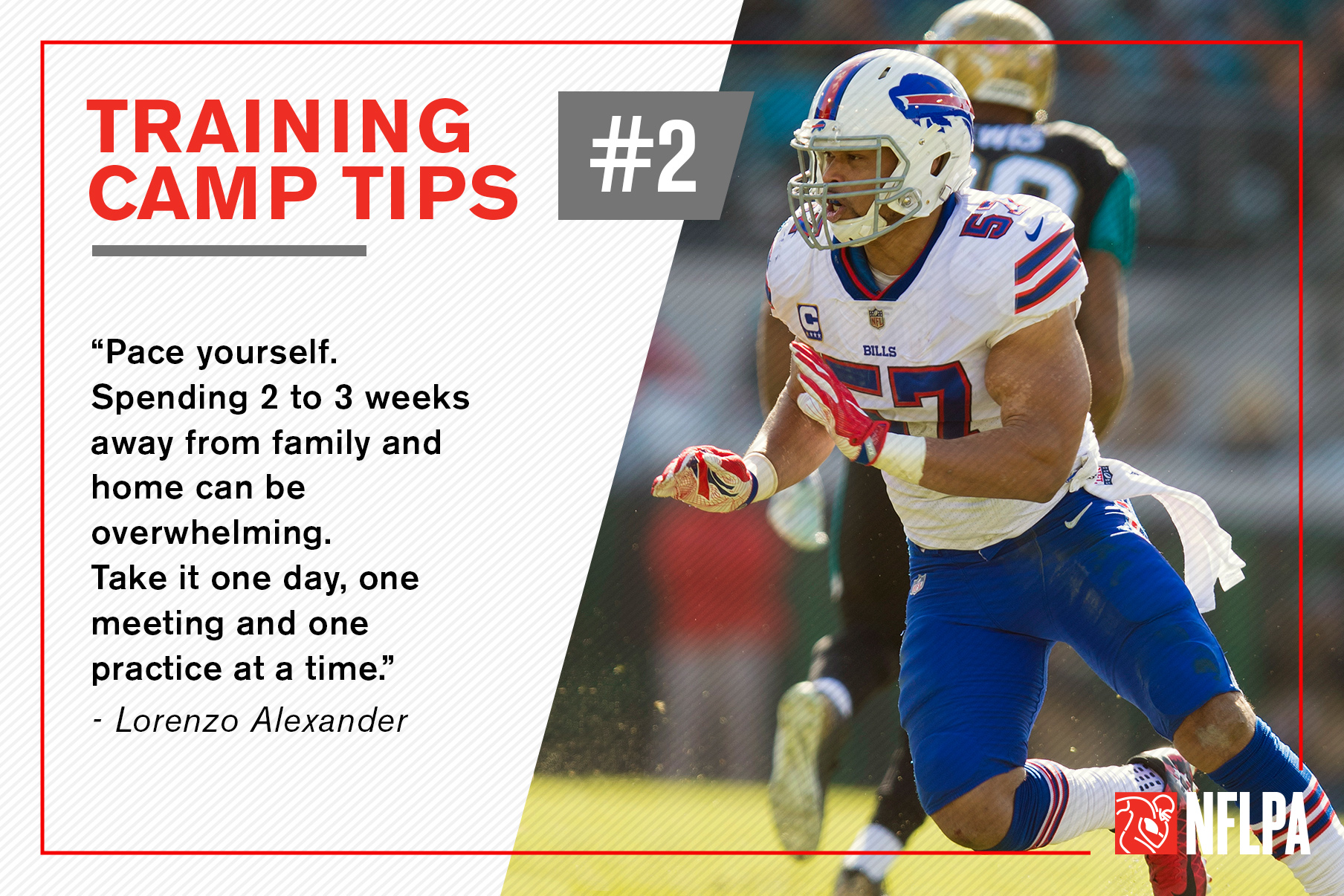 Q: What’s the biggest difference in preparing for the NFL season versus preparing for a college season?
A: As a rookie, you have to hit a big reset button. You’re no longer the leader or veteran in the room. You should look to listen more than you speak. Not that you can’t speak up at times, but you shouldn’t interject more than you soak up. Also, now you’re competing with the best of the best. So you’ve got to bring your ‘A’ game every day. You can’t take a play or a down off because you never know who’s watching that day. You’re not going to win every time, but you’ve always got to compete.

Q: What’s your mentality entering your 14thtraining camp as a proven veteran?
A:What’s always in the back of my mind is that I’ve got to prove myself every day and nothing is guaranteed. My career has been so unique, bouncing from one position to the next. I have to show these young boys I can hit and whip them, even at 35. Coaches are looking to see if I’ve lost to step. Nope, I haven’t. But my mentality is that today could be your last day, so I’ve got to give everything I’ve got. 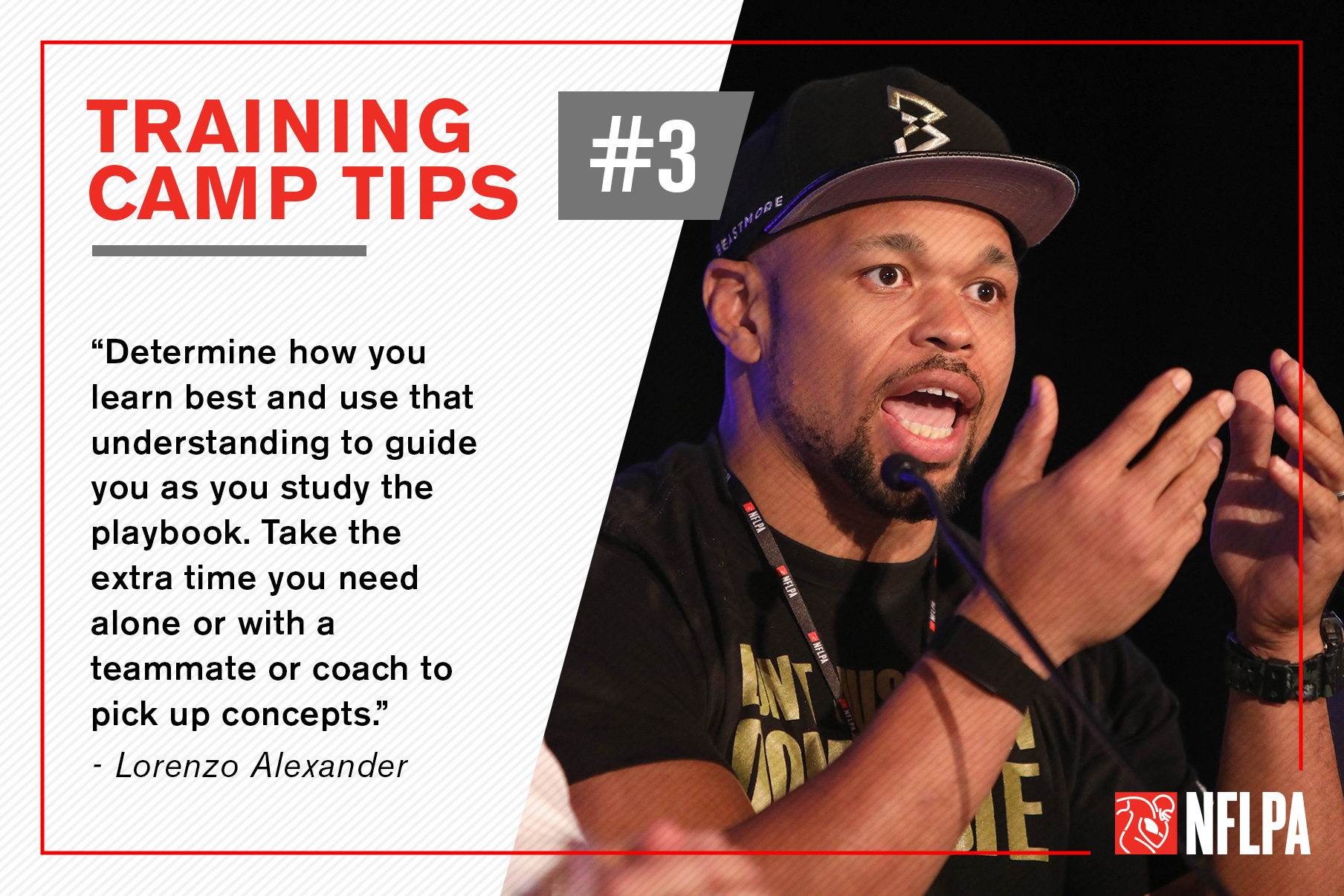 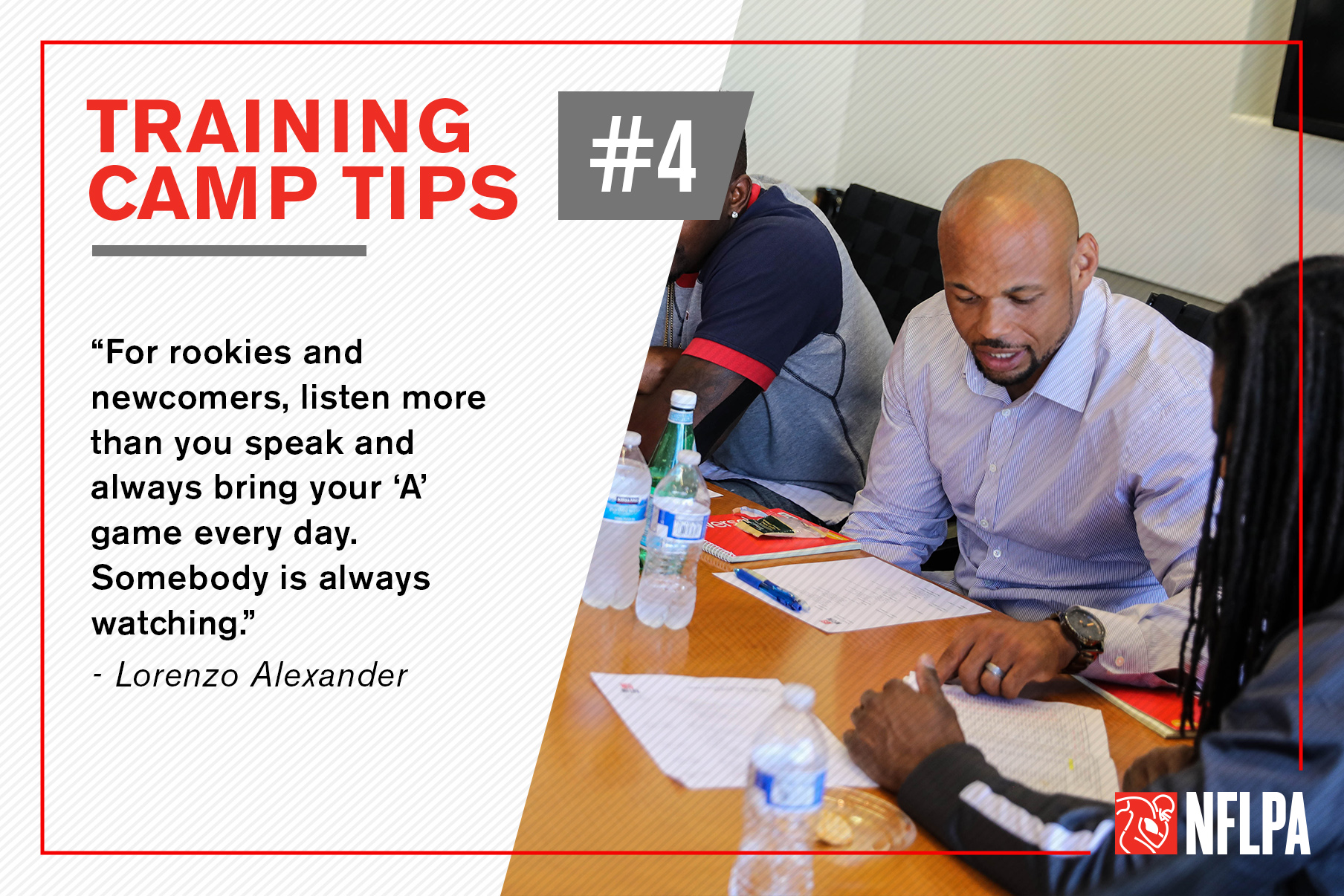 Q: How much have the practice rules under the current CBA helped players?
A:There’s no doubt in my mind that if we hadn’t changed the training camp rules, I’d be out of the league. I don’t think young guys especially understand what it’s like to play for an old school coach like John Fox or Joe Gibbs where you practice for 3 hours in the morning, take a 2-hour break and then do the same practice at the same level. In Washington, we did pads in season on Wednesday, Thursday and Friday for 17 weeks. That accumulation of trauma to your body has an impact. So to have some relief by not having things like two-a-days and constantly in pads has been a blessing to me and other veterans. 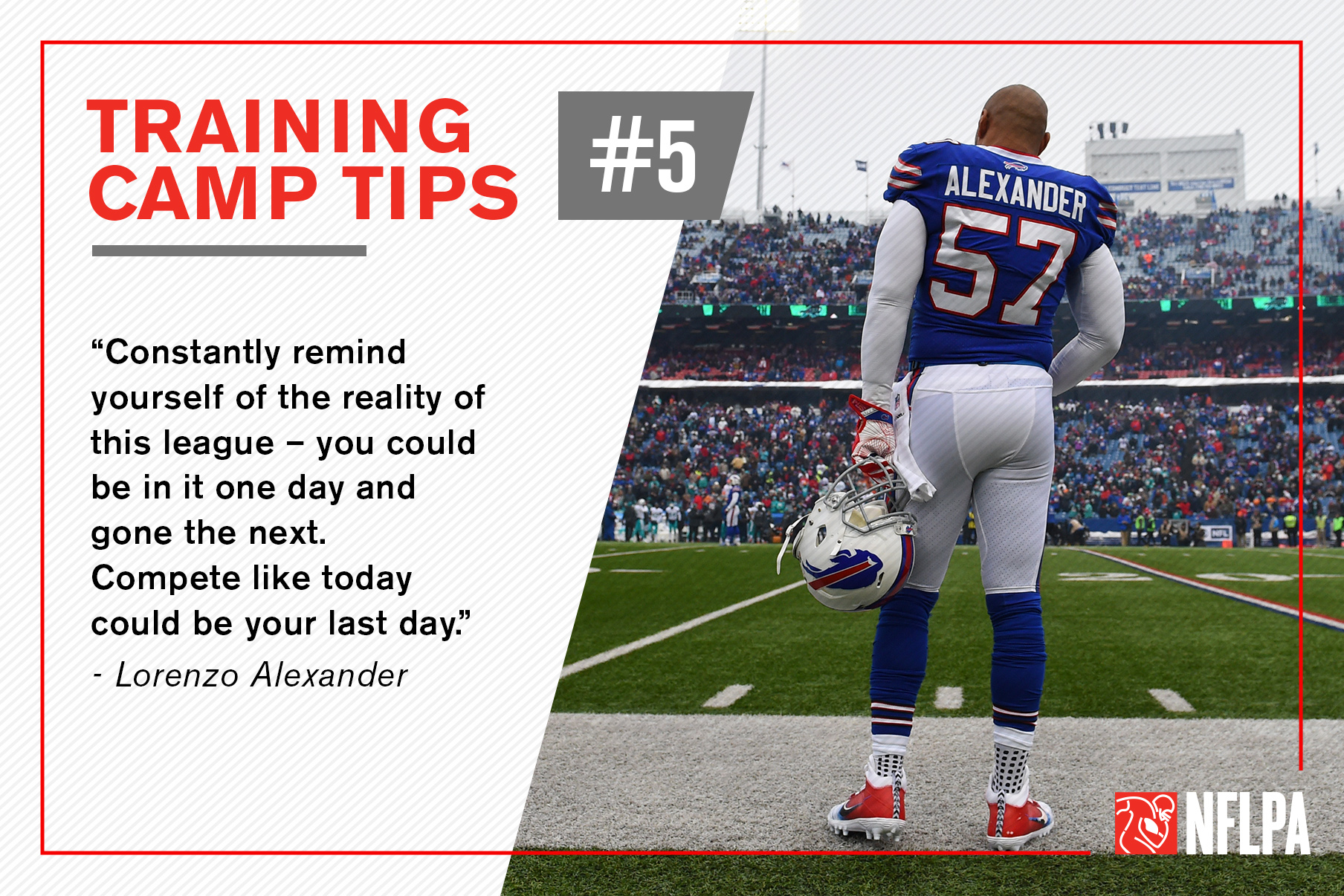