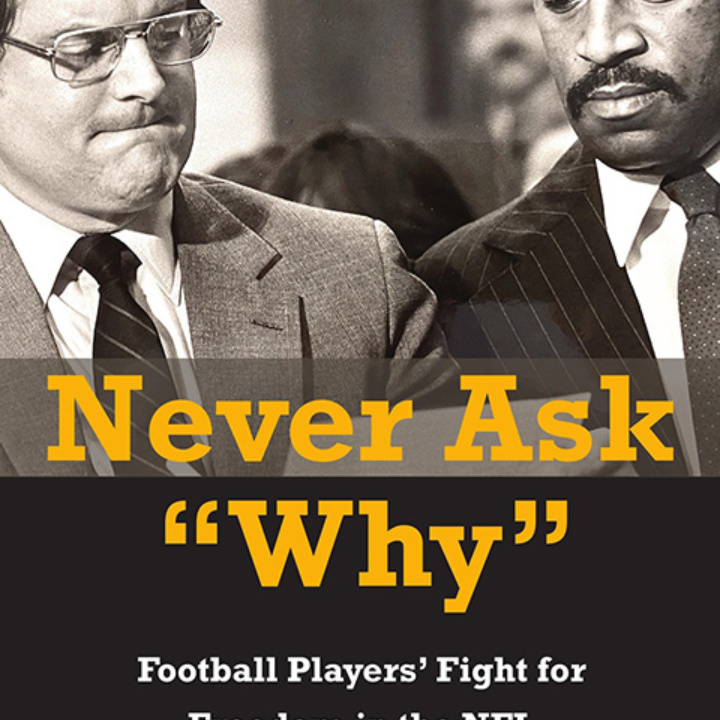 How Ed Garvey and the NFLPA Changed The Pro Sports Landscape

When Ed Garvey, then a 31-year-old attorney from Wisconsin with no football background, took over as the first executive director of the NFL Players Association in 1971, his credentials didn’t exactly fit the job description. But over the course of a 12-year tenure built on the premise that athletes should be treated for who they are – workers in the labor force – Garvey helped generate the spark needed for the union to earn big wins, including true free agency, larger revenue for the players and, perhaps most importantly, dignity on the job.

In the latter years of his life, Garvey began putting together notes for a book about his time leading the NFLPA. When Garvey’s 2017 death at the age of 76 prematurely halted this endeavor, award-winning journalist Chuck Cascio was asked by Garvey’s family to take the baton in finishing the job.

Never Ask “Why”: Football Players’ Fight For Freedom poignantly presents the story behind how the athletes who made up the game of football fought to make sure the league’s owners played fair – all through the words and lens of Garvey.

In anticipation of its December 23 release, Cascio recently discussed the book’s origins and message.

How did it come about that you would be the one who finished what Ed Garvey started in writing this book?

When Ed died in 2017, his family knew he was trying to put together a book to tell the story of establishing the NFLPA and the fight for player rights. Through a mutual friend in [former NFL player and NFLPA assistant executive director] Brig Owens, he put me in touch with the family. I wrote my first book with Brig in 1972, and the Garvey family graciously asked if I could put together Ed’s notes into a manuscript for his book. So I got in touch with an agent and we were able to secure a publishing company in Temple University Press. This all was about a three-to-four-year process.

What was that process like in pulling together a book for someone who you didn’t have the luxury of speaking with along the way and yet still maintaining his vision?

What kept me going was, absolutely, the importance of this book in the world today. There’s this assumption that athletes have it made, so they should just be quiet. That’s a direct reflection of what Ed and the players had to deal with, and it’s still going on today. The title is “Never Ask ‘Why.’” Ed wanted that title because that’s what players were told when they asked about contracts or certain benefits that, really, they were entitled to. Owners said don’t ask why; just do what you’re supposed to do on the football field. And of course, Ed and the players mightily pushed back against that.

There’s so much unique content, and it’s all in Ed’s own words. The book is very conversational with both personal and scholastic appeal. The Garvey family graciously provided me with tons of information – some that was roughed out in manuscript form and some where you could see notes of his thought process. I did as best I could to honor his words and content. It’s not an autobiography of his life, though. It’s a reflective, honest piece about his tenure with the NFLPA and the 12 or so years when he was really in charge of things.

What are some of your biggest takeaways from the book?

When most people look at pro athletes, they think “Oh, they’ve made it with the money and fame.” But that’s not entirely true. Yes, they are a lot better off today than they were in the ‘70s and ‘80s, which is when Ed was running the NFLPA. But it took a lot of work and sacrifice to build that progress, and that work is far from finished in holding the league accountable in treating players fairly as workers and people.

One thing that we really see in the book is the fight to get rid of the Rozelle Rule and the limitations that were in the standard player contract, which was based on a system built in the 1870s. There was no right to go play for another team, and I wasn’t fully aware of how much power that gave owners over players, who were basically giving up their bodies every day for their sport and profession. Ed said, they were not being treated as professionals; they were being treated like chattel.

To me, while I had some awareness, I was guilty as any other fan who says, “Oh man, why are athletes complaining? They have it made.” You really start to understand the roots and what they had to go through to earn what they have today.

Are there any anecdotes that you especially enjoyed or feel like truly capture who Ed was during his time leading the players?

Ed always had a quick wit and humor about him as well as a deep intelligence -- and that comes through often in his writing. He also made a great comparison with the singer Barry Manilow about how he gets 90 percent of the ticket revenue that comes in but football players don’t get anything close to that for doing their job in much the same way.

I found it fascinating to get a glimpse into how Ed discovered the wage scale among owners, which was a confidential agreement to limit and determine how much players should be paid. That’s where the “No Freedom, No Football” slogan came from during the 1974 strike.

There are also times where Ed admits he and the group of players were naïve and made mistakes. They were guilty of believing the owners were going to change after the Rozelle Rule was struck down in court, and then two days later, they see nothing changed. Instead, the owners were using their influence over the media to push a narrative against the players. That type of transparency makes the book even more compelling.

What is the one message that you want readers to get from reading this book?

Something that comes through in the book and Ed re-emphasizes in the end is that, while writers focused on the players’ concerns with the reserve system in economic terms, players were subject to a lot of non-economic factors as well. For instance, Black players were not able to play certain positions like center and quarterback.
And listen, we’re not talking about 150 years ago. We’re talking about the 1980s. This was real, this was going on and it still is going on today in many different ways. That’s what I want people to take away, and Ed hits on this in an excerpt at the end of the book:

“So, the battle is joined. Management, with weapons from all other sports leagues, the union with help from the AFL-CIO. Looming on the horizon are billions of dollars to be generated by pay cable television. When the fight comes, NFL players will understand that the “performers” deserve most of these revenues and they will understand that, if successful, the reserve system and all of its dehumanizing aspects will have died in the NFL. It will be a battle worth watching, worth participating in.”

To learn more about the book Never Ask “Why”: Football Players’ Fight For Freedom and purchase a copy, please visit Chuck’s website.