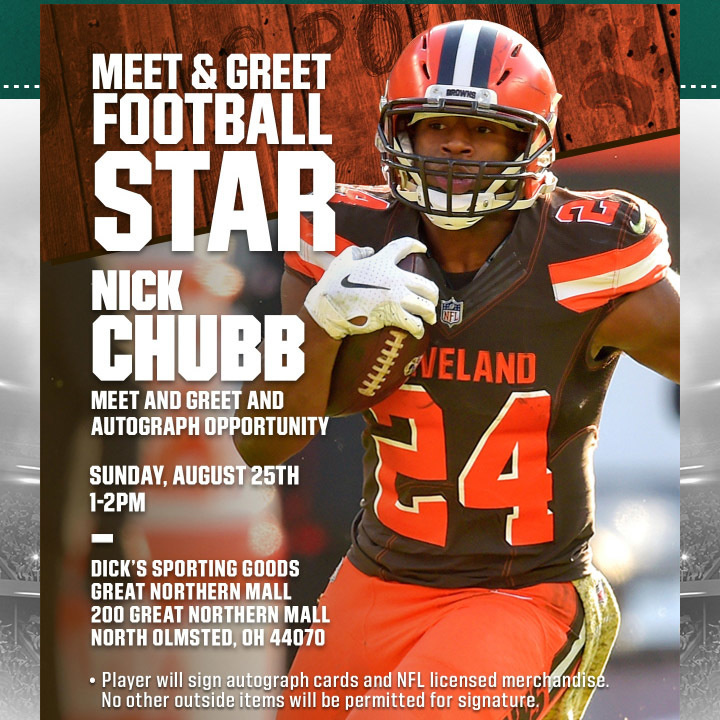 Party Animal partnered with the NFLPA to create a new line of NFL player-branded Jersey Aprons featuring the players’ names and uniform numbers.

Party Animal is a leading manufacturer of professional and collegiate sports and entertainment licensed toys, flags and decor based in the westside Cleveland suburb of Westlake, OH.

As part of Party Animal’s product release strategy, they identified a local Dick’s Sporting Goods retailer in North Olmsted as a launch destination. The NFLPA connects businesses to the power of NFL players, working closely with partners to maximize group player rights and enhance the connection between players, their licensed products and ultimately, their fans and consumers.

Realizing the natural synergy between Party Animal’s headquarters and the Cleveland Browns, the NFLPA Licensing and Player Services teams recommended a meet-and-greet promotion with Browns running back Nick Chubb to generate buzz and product sales. Chubb was a second-round draft pick in 2018, a 2019 Pro Bowler and the 2019 Offensive MVP for the Browns after finishing with the second-most rushing yards in the league.

Dick’s jumped at the opportunity to align with a new NFLPA licensee and a marketable, young NFL star. The store ran a limited promotion that allowed fans to secure Priority Line wristbands to a Nick Chubb exclusive autograph session with the purchase of Party Animal’s NFL Player Jersey Aprons.

According to Party Animal, in the week leading up to the event, in-store sales of the Party Animal Nick Chubb licensed apron were 2000% higher than the weekly sales average. Attendance for the Nick Chubb NFLPA Party Animal meet-and-greet at Dick’s exceeded planned goals by 60%.

“We had an awesome event at Dick’s with Nick,” said Bryan Cantrall, President of Party Animal, Inc. “He and his agent were both great and we had a really nice turnout for the event! He was even willing to put the apron on! I would definitely recommend him for other events. Thanks for all your help in creating this event!!!”

Teaming up with Party Animal to provide Browns fans with an amazing experience was fun. I really enjoyed the appearance and giving fans something to remember. Looking forward to doing it again.